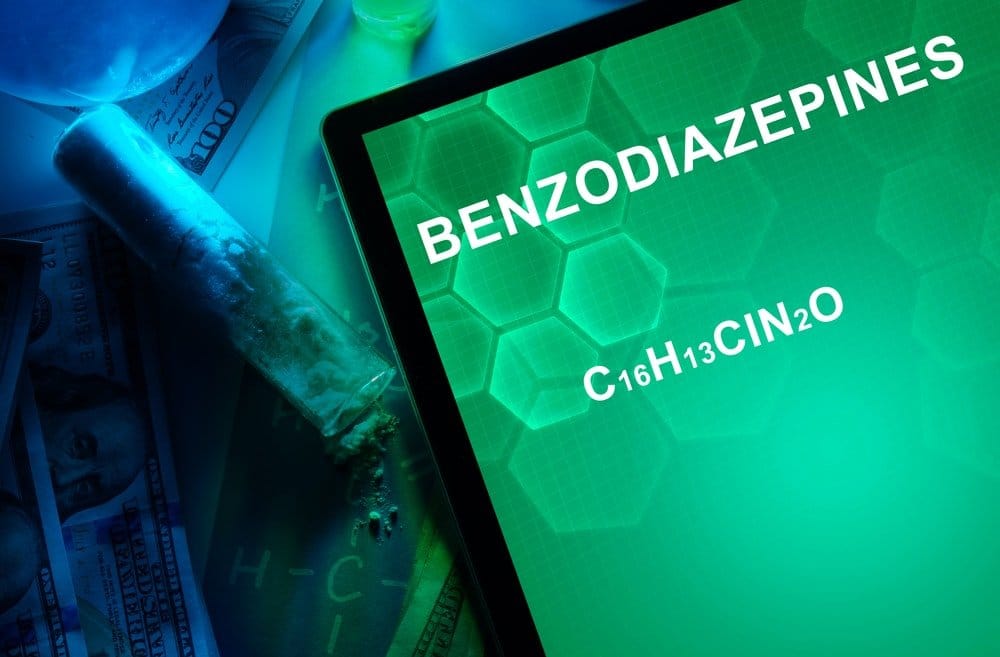 Benzodiazepines, often called benzos, can stay in your system for quite some time. However, they’re a complex class of medications and the various subgroups each work a bit differently. Moreover, the effects are not the same for everyone even when an identical medication is taken.
How long it lasts depends on:

More details about how long specific benzos impact you and remain detectable in drug tests are outlined below.

How Long Do Benzos Stay in Your Body?

Benzos differ in terms of how long they work and how quickly the body and brain effects take hold.

Long-acting benzodiazepines such as those mentioned above have body and brain effects that can be felt for one to three days after last dose. This is due to the half-life of each drug and its metabolites. In the examples above, the half-life of their respective metabolites can be up to 100 hours.

That means it takes the body 100 hours to eliminate half of the compound. Yet, in some people, those same metabolites can be halved in three hours and their parent compounds in five. This is where individual differences like genetics and dosing comes in.

That said, they differ in terms of how quickly they start working too. For example, Dalmane and Valium are rapid-onset drugs that can start working in as little as 15 minutes. Librium typically takes 15-30 minutes, making it an intermediate onset drug.

Intermediate-acting benzodiazepines such as those mentioned above last approximately 11-20 hours. In these cases, the parent compound has a half-life of anywhere from 3-39 hours. Most top out at about 20 though.

These differ in onset of action too. For example, Ativan has fast-acting formulations that can start working in 15 minutes. Xanax and Klonopin are intermediates. They can be felt in 15-30 minutes. Serax and Restoril are slow. They take 30-60 minutes.

Short-acting benzodiazepines such as those mentioned above wear off within 5-6 hours. Versed is typically used as a preoperative sedative and has a duration of action of 1-6 hours. Its half-life is 1-4 hours.

Halcion is a sedative typically used for insomnia. It has a duration of action of 3-5 hours and a half-life of 1.6-5.5 hours.

When Does Benzo Withdrawal Start?

Symptoms of benzo withdrawal can emerge within hours or can start days after the last time taken. The half-life of the medication impacts this greatly.

For example, someone who has been taking a long-acting benzo with an extensive half-life will build up more of the drug in their system. It can take days before withdrawal symptoms begin.

Someone taking a short-acting benzo will typically feel withdrawal symptoms much quicker. The short half-life means withdrawal onset may begin within hours of the last time taken.

In any case, dependence rates are very high with benzos even when they’re taken as directed. Because of this, doctors usually only prescribe sparingly. Tapering, supervision, and other interventions are usually used to help someone come off benzos.

How Long Do Benzos Stay in Lab Tests?

How Long Do Benzos Stay in Your Urine?

It’s generally accepted that benzos can stay in your urine for two to ten days. Short-acting varieties are usually flushed out within two days. Intermediate-acting versions are detectable for up to five days. Long-acting can be detected in urine for as many as ten days.

However, some sources indicate that there’s as much as a six-week window in certain situations.

How Long Do Benzos Stay in Your Hair?

Benzos can stay in your hair for up to three months. The biomarkers of each drug become entrapped in hair as it grows. This means can take a few days after the first dose before a hair test will show a positive result too.

How Long Do Benzos Stay in Your Blood?

Benzos stay in your blood for 6-48 hours. The window is much shorter for blood screening than it is for other types of drug tests.

How Long Do Benzos Stay in Your Saliva?

The difference comes back to half-lives. Alprazolam has a half-life of 6-20 hours and clonazepam’s is 18-39 hours.

Get Help for Benzo Dependence

Dependence to benzos isn’t just common. It’s the only outcome observed in clinical studies of those taking benzos after a matter of months of regular use. In other words, it’s a known and expected outcome when someone has been taking a medication within the class for an extended period.

If you or a loved one wants to kick benzos, get the help and support you need. Contact our treatment center to take the first step to a healthier future.