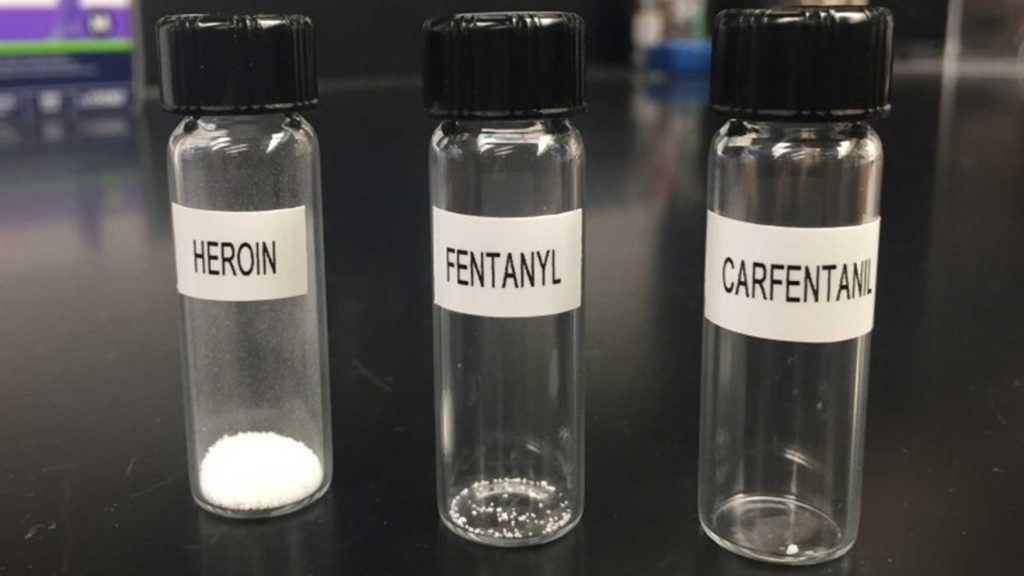 According to the National Institute on Drug Abuse, most overdose deaths involved synthetic opioids, which are analgesics (painkillers) made in laboratories. They act similarly to opiates (natural opioids) such as morphine and codeine. However, they’re much more powerful.

Two of the most well-known and deadly synthetic opioids are carfentanil and fentanyl.

The United States Drug Enforcement Administration (DEA) classifies both carfentanil and fentanyl as Schedule II Controlled Substances. That means that although they have legitimate medical uses, they pose a high risk of abuse and addiction.

Despite their similarities, the drugs differ in a few key ways.

Carfentanil is a fentanyl analog. That means it was created to mimic the effects of fentanyl. However, it’s about 100 times more powerful.

Sold under the brand name Wildnil, carfentanil is not intended for human ingestion. Instead, veterinarians use it as a tranquilizer for elephants and other large mammals.

In recent years, some people have started selling carfentanil on the street, often disguising it as heroin. It’s sold in many forms, including:

Some forms of carfentanil can be accidentally inhaled or absorbed through the skin. Thus, law enforcement officials, first responders, and other professionals must take extreme caution when interacting with the drug.

Because it’s so powerful, even a small amount of carfentanil can cause a fatal overdose. Common signs of overdose include:

If you or someone you know experiences these symptoms, call 911 right away.

In most cases, first responders will treat a carfentanil overdose by administering naloxone (brand name Narcan).

This medication attaches to opioid receptors in your brain and rapidly reverses the effects of an opioid overdose. Since carfentanil is so strong, the person who overdosed may need multiple doses of naloxone.

All forms of fentanyl can cause side effects like drowsiness, nausea, and constipation. Some people abuse prescription fentanyl by using it in a manner not prescribed by a doctor. For example, they might:

These behaviors pose a high risk of overdose. However, most people who overdose on fentanyl don’t use prescription fentanyl. Instead, they use fentanyl that was made illegally and sold on the street. Street fentanyl usually resembles a white or brown powder, clear liquid, or white pill.

Some drug dealers mix fentanyl powder with other substances, including heroin, meth, and cocaine.

Others make fentanyl pills and pass them off as other drugs, such as Xanax or ecstasy. They do this to give buyers a more intense high or to cut production costs (as fentanyl is very cheap). In many cases, buyers don’t know when a drug contains fentanyl.

Most people with opioid addictions need professional treatment. When you enter an opioid treatment program, doctors will design a personalized treatment plan for you. The plan may include services such as: