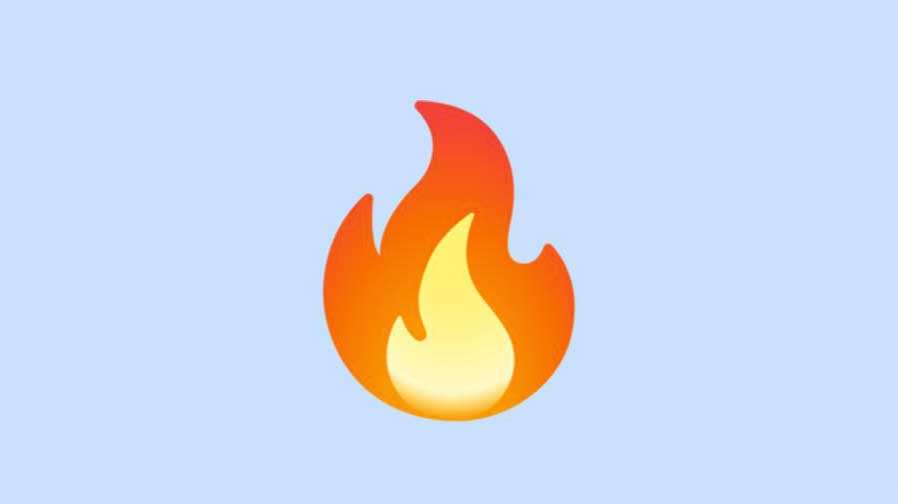 Whether they’re sending a text message, writing an email, or making a social media post, many people use emojis.

One of the most popular emojis is the Fire emoji 🔥 (also called the Flame emoji or Hot emoji). It resembles a yellow and orange flame. Some versions of the emoji, including the Apple and Microsoft versions, also have red on top. Like many emojis, it has multiple meanings.

The most common meanings of the Fire emoji include:

In some cases, people use the Fire emoji when they are smoking or want to smoke drugs. They may also use it to represent smokable substances such as marijuana, crack cocaine, and crystal meth.

When used to describe drug use, the Fire emoji may be accompanied by slang terms for smoking drugs, such as:

The sender may also use other emojis to represent smokable drugs. These drugs and their most popular emojis include:

Lots of people, especially young people, use the Fire emoji to describe things they enjoy. You might see it used to describe songs, movies, or anything else a person likes. This usage probably comes from the slang term “lit,” which means “awesome” or “exciting.”

The Fire emoji is sometimes used to show an attraction to someone. People who use it this way may pair it with other flirtatious emojis, such as the Heart Eyes or Winking emojis.

Although less common than other uses, the Fire emoji may signal anger or frustration. It can also represent a flamewar, which is an argument that takes place online.

Some people use the Fire emoji to indicate an actual fire. For example, you might see it in discussions of California’s wildfire crisis.

When used in this way, the Fire emoji is often accompanied by other fire-related emojis, such as the Fire Engine, Fire Extinguisher, or Firefighter emojis.

Sometimes, the Fire emoji simply communicates that it’s hot outside. In this case, the sender may also use other weather-related emojis, including the Sun, Thermometer, or Sweating emojis.

If you use the social media app Snapchat, you may see the Fire emoji beside a friend’s username. This means you are on a Snapstreak. A Snapstreak occurs when you and a friend have Snapped each other (sent pictures or videos) within 24 hours for more than three consecutive days.

Next to the Fire emoji, you’ll see a number that indicates the current length of your Snapstreak. If the Snapstreak is about to end, an Hourglass emoji will appear beside your friend’s username.

What To Do If You Think Your Child Is Using Drugs

If you notice that your child is using drug-related emojis or slang, talk to them. Calmly explain that you are concerned about their health. If they admit to using drugs, try to find out why.

Some kids try drugs due to curiosity or peer pressure. Others use them in an attempt to self-medicate anxiety, depression, or other mental health concerns. When you understand why your child started using drugs, it will be much easier to help them stop.

You should also contact your child’s healthcare provider. They can determine whether your child has developed drug addiction (also called substance use disorder). This serious disease makes you feel unable to stop using drugs. Common symptoms include:

Like other diseases, addiction requires treatment. The most common treatments include medical detoxification, mental health counseling, and support groups.

To learn more about addiction treatment options, please reach out to Northeast Addictions Treatment Center. Our board-certified treatment providers offer personalized, evidence-based care to help you and your loved ones stay healthy.

National Library of Medicine: MedlinePlus — Drug Use and Addiction