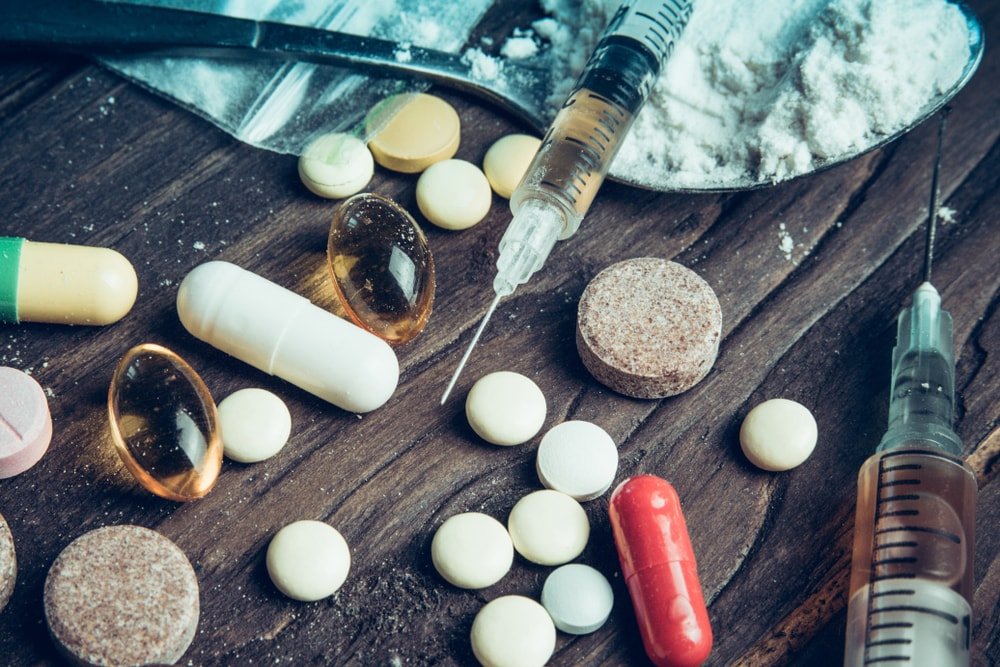 The terms “illicit drugs” and “illegal drugs” are often used interchangeably, but this isn’t necessarily correct. Illicit drugs are a classification that includes either stimulant drugs (uppers), depressants or hallucinogenic drugs such as LSD. However, illicit drugs are also deemed dangerous enough to have been made illegal, in many cases, around the world. Still, even within the United States, laws can be different from state to state.

Marijuana for recreational purposes is legal in some states and illegal in others. This can make defining illicit drugs a little challenging.However, even “marijuana” can be a catch-all term. There can be THC in marijuana, which can cause hallucinations and that “high” feeling, and there can be CBD which provides a pain-numbing effect. There are thousands of strains of marijuana. Many have both THC and CBD to varying degrees. Some have just THC or CBD. If a marijuana strain only has CBD and not the hallucination-causing THC, is it really an illicit drug?

It’s easy to see how digging deep into this question can make your head spin. Still, most people inherently know through culture and general information which drugs are illicit. There is no way to make an exhaustive list of all illicit drugs since they can vary state to state, include many prescription drugs, and even some household items, such as cleaners which can be utilized as an “illicit drug.” The following is a list of the most common substances that are considered illicit drugs:

Cocaine is one of the most commonly known “hard drugs” or “white drugs.” Also called “coke,” in its pure form it is derived from the coca plant.

Technically, it is a natural drug, although even pure cocaine requires a lot of processing in order to turn it into the street drug that is usually snorted, smoked, or injected.

People in South America, where the coca plant is native, have also chewed the leaves of the plant for hundreds of years. This offers a kind of stimulating high, but not nearly as strong as the one processed cocaine provides.

More commonly known as crack, crack cocaine is usually “cut” with substances such as baking soda. However, since you can’t get cocaine as a prescription drug in the U.S. (it was a very popular and common prescription drug in the past, especially for sinus infections), people who buy cocaine or crack on the street don’t ever know exactly what they’re getting. Cocaine or crack might be cut with a generous amount of baking soda or other type of substance—sometimes a substance much more dangerous than cocaine. Crack is used very differently than cocaine. It’s boiled and hardened, and the product “cracks” apart (thus the name). The name also comes from the crackling noise that happens during the boiling process. Crack is most often smoked, and the resulting high is more intense but much shorter than that of cocaine. Crack is generally more dangerous than cocaine because of the quality and the higher possibility of containing dangerous substances. Plus, in the U.S., the fines for being caught with crack are higher than cocaine.

Also known as MDMA, there is an element of methamphetamine to ecstasy. It is more often taken as a “club drug” and used recreationally. Symptoms of using ecstasy include increased pleasure and empathy as well as sometimes a rapid heart beat. It’s common to unknowingly grind or clench your teeth, or chew on your cheeks, while under the effects of this drug. That’s why many ecstasy users chew gum or suck on pacifiers while they’re high (and why pacifiers are banned in many clubs). However, this grinding and chewing can be so intense and not felt in the moment that cracked teeth and severely gnawed lips and cheeks might be discovered once the drug has worn off. Ecstasy is also dangerous because of the connection with increased sexual liberties. Someone on ecstasy might have a sexual encounter that they otherwise wouldn’t have while sober or on a drug like alcohol.

There are many types of opioids and opiates, which are also illicit drugs when taken recreationally. However, fentanyl is the most dangerous of all. It is a type of synthetic opioid that is up to 100 times stronger than morphine. Fentanyl can be prescribed as a drug to treat pain, but is the most addictive and risky of all opioids and opiates. Heroin users sometimes switch to fentanyl because of the stronger high, but even with a “tolerance,” they can misjudge and easily overdose. It can cause a euphoric feeling followed by a blackout sleep and possible respiratory distress.

Also known as a date rape drug, GHB is actually a prescription drug to treat narcolepsy. It depresses the nervous system, and it’s easy to see why a drug originally intended to treat a sleep disorder can be a very effective date rape tool. However, it does produce a feeling of euphoria and puts the person in a blackout state. GHB isn’t just for narcolepsy, it is also taken recreationally due to the high it provides.

For many years, heroin was considered the deadliest and most dangerous drug in the U.S.—until opioids and opiates took its place. However, all three of these drugs are connected to morphine in some way. Heroin is especially dangerous because it’s injected. This not only allows for a fast high, but also increases risks associated with recreational needle use. Heroin gives the user a feeling of euphoria, often followed by a blackout. Treatment for heroin addiction is only one call away. Talk to our treatment specialists today at Northeast Addictions Treatment Center.

Ketamine is a relatively new “club drug” compared to ecstasy, but it is also used in medical settings. The most popular ketamine brand name is Ketalar, and when used properly it is an anesthesia drug. It puts the patient into a type of trance while simultaneously numbing pain. However, ketamine also causes short-term memory loss. It’s no surprise that such a drug is picking up usage recreationally. Any prescription-strength pain medication has the potential to become addictive.

LSD is a type of acid that peaked in the 1960s and 70s but has sustained some amount of popularity over the decades. It is mostly a hallucinogen and can shift a person’s thoughts, awareness, and reactions. It’s commonly reported that LSD users see things or hear things that aren’t real. LSD is almost always used recreationally, although some mental health experts have experimented with using LSD in tightly controlled clinical settings. Although some people think a strictly hallucinogenic drug can’t be addictive or dangerous, that isn’t necessarily true. When people see or hear things that aren’t there, that can lead to very dangerous behavior. There’s also an increase in body temperature with acid usage, which can cause dehydration.

Methamphetamines are very addictive and impact the central nervous system. There are different types of meth, and crystal meth is the most dangerous. Crystal meth has no prescription counterpart. Heart disorders are one of the most dangerous side effects of using meth, which can be smoked, taken orally, snorted, or injected.

There are many types of mushrooms, and psilocybin mushrooms are known for their hallucinogenic effect. “Shrooms” work similarly to LSD in the body and are most often ingested. However, given the lack of ability to control amounts and the variance within mushrooms, “bad trips” can happen. Like LSD, the most dangerous aspect of mushrooms is what a person might do when they see and hear things that aren’t real.

True opiates are a prescription drug derived from the poppy plant. They have a high risk of the patient becoming addicted and dependent. It is also a popular recreational drug thanks to the intense high it offers coupled with pain numbing properties. Proper opioid usage in the U.S. should be accompanied with a prescription and short-term usage for short-term pain management. Technically, morphine and heroin also fall into the opiate family as they are derived from ingredients that are in opiates. However, only morphine may be used as both a prescription and illegal drug.

Opioids are very similar in chemical makeup to opiates, but they have some synthetic element to them. Some are partially synthetic and others are fully synthetic. There are many types of opioids, including the dangerous fentanyl. Like opiates, they can be a prescription drugs and when used properly they can be an effective pain management tool in the short-term. However, they can also be an illicit drug when used recreationally. Both opioids and opiates can go by many street names.

Also known as “angel dust,” this drug has strong hallucinogenic effects. Users report changes to sounds and can sometimes become violent. It is most often smoked, particularly when taken recreationally. Originally, PCP was created to be an anesthetic, but that use was stopped in the 1960s due to the dangerous side effects.

Also known as “roofies,” this is another type of date rape drug. Like GHB, it is also available as a prescription and is a type of benzodiazepine that is used similarly to Valium. It might be prescribed to treat insomnia or before a surgery as a type of anesthesia. Clearly, roofies also make for ideal date rape drugs. They became especially popular for this purpose because they are accompanied by a kind of amnesia. Users and victims often don’t remember what happened during a roofie blackout. However, Rohypnol also has another purpose. Beginning in the 1990s, it was prescribed as an antidote for the depression that often accompanied withdrawals from stimulants like cocaine.

Withdrawals will vary based on the person, the degree of addiction, and the drug itself. Some drugs are much more addictive than others. For instance, fentanyl is the most addictive drug on the street (and as a prescription), while drugs like mushrooms normally aren’t associated with addiction.

Those addicted to drugs like crack and fentanyl can undergo severe and sometimes dangerous withdrawal side effects. Death can happen for those who go “cold turkey” off of hard drugs since the body truly needs to be weaned. It needs some amount of the drug to sustain itself. This is why it’s important to trust a rehabilitation center or drug addiction expert when considering stopping or slowing down the use of illicit drugs.

Treatment for Illicit Drug Use

Treatment for illicit drugs will also vary based on the person and the drug. For instance, though not common, treatments for marijuana exist. There’s a difference between use and abuse, although it sometimes takes an expert to help define where that line is for each person.

Rehab treatment centers are the best and safest way of getting off an illicit substance. Detoxing from certain drugs can be life-threatening and incredibly uncomfortable. In a rehab facility you are under the care of medical and addiction specialists who will ensure your safety.

If you or someone you love is addicted to an illicit drug, it can be very risky to try to treat addiction without professional help. A professional and a rehab clinic give you the best odds for a safe recovery.