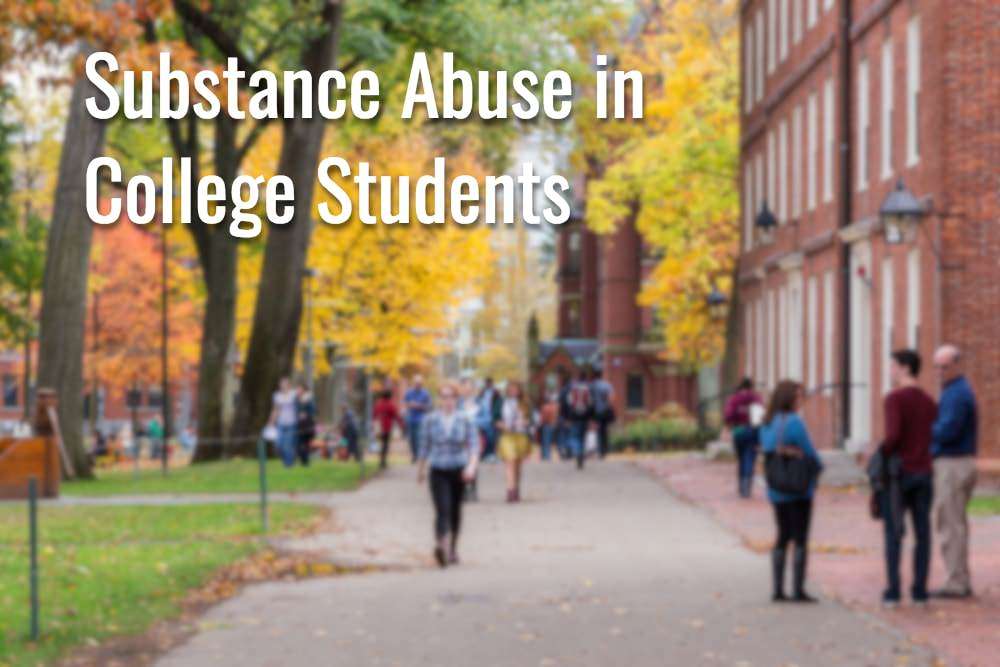 College is often the first experience that young adults have with independence. Though some live at home while in school, more than half choose to live on or near campus.

For them, the desire to get out on their own is one of the biggest reasons for going to college in the first place. One part of the traditional college experience is the socializing and partying.

Binge drinking and abuse of both recreational and prescription drugs are common concerns. Substance use and abuse among college students is twice as likely than it is among young adults who are not in school.

This trend can include alcohol abuse, particularly in colleges with an active Greek system. Many students report having tried drugs or alcohol for the first time while in college.

What Types of Substances Do College Students Abuse?

College life is the perfect storm for drug abuse opportunities. Students are exploring their independence, often for the first time, they’re making new friends and exploring new experiences, and they’re under a lot of stress.

Though the specific substance abuse facts can change, there are three main categories the abused substances tend to fit into; alcohol, prescription medications, and illicit drugs.

Excessive and underage drinking exact a heavy toll on America’s college students, aged 18-24. Each year hundreds of thousands are the victims of assault, including sexual assault, and thousands die under alcohol-related circumstances.

Surveys suggest that nearly 60% of students between the ages of 18 and 22 drink, and that roughly 2/3 of them engage in binge drinking.

As many as one in four college students admit to having used prescription drugs when they did not have a medical need for them. This non-medical use of pain medications is increasing among young adults. Prescription stimulants, in particular, are being misused by college students to help meet the study demands of university life.

Some of these drugs may be perceived to be safer than illicit drugs because they’re medically sanctioned. The preferred drugs of abuse amongst college students are:

Nearly 25% of college students report having used illicit drugs. These drugs can be found in on campus housing, at parties, in bars, and even among study group members and classmates. Drug dealers sometimes target college campuses due to the concentration of young adults with access to at least some amount of cash, due to the costs of school attendance. Some illicit drugs that may be abused by college students are:

Why Do College Students Abuse Drugs and Alcohol?

Use of a substance reaches the level of abuse when it is taken in any manner other than what was intended. With alcohol, low-risk levels of use differ for men and women. For women, the level of safe use is not more than 3 drinks any given day and 7 or less per week. Men’s limits, due to body mass and metabolism differences, are 4 per day and 14 per week.

The difference between use and abuse is even simpler to define when drugs are involved. The abuse of prescription or over-the-counter medications occurs any time that the drug is taken in any manner other than how it was prescribed or intended. Any consumption of illicit drugs is classified as abuse, even if it is light and infrequent.

Substance abuse can be one of the causes of drug addiction, but it doesn’t always happen that way. Some people can abuse drugs for years and never have to deal with addiction, yet others use one time and are hooked. Usually, however, duration or frequency of drug abuse does play a role in the development of addiction.

Causes of drug addiction can vary greatly from one person to another but, often, risky substance use can lead to addiction. Beginning to use alcohol, drugs or nicotine at an early age is one type of risky behavior. Another example of risky behavior that can lead to addiction is binge drinking, which is generally defined as consuming an excessive amount of alcohol within a short amount of time.

The bottom line, however, is that addiction is a disease with no simple or straightforward origin. Addictive disorders result from a combination of genetic, psychological, environmental and behavioral factors. But it’s clear that, when the line between use and abuse becomes blurred, the risk of addiction is greatly increased. A look at the physiological effects of drug abuse might shed some light on how this occurs.

What Are the Physiological Effects of Drug Abuse?

The brain regulates all the body’s functions, which is why the effects on the brain from drugs can, sometimes, be quite severe. The way drugs work, once reaching the brain, is basically to hijack its communication network. This can occur because some drugs are similar enough to the body’s endogenous neurotransmitters that they can activate the same neuron receptors, though often in a slightly different manner.

The signals transmitted by drugs can be garbled, so they end up confusing the brain rather than activating it. They can also create greatly amplified messages by inducing the production of excessive amounts of neurotransmitters, or by reducing them brain’s ability to remove them. Either of these can, eventually, result in a complete disruption of the communication network.

Another area of the brain that can be affected by drug use is its reward system. The purpose of this part of the brain is to ensure survival by providing a pleasurable response to life-sustaining activities, such as sustenance and reproduction. The intrinsic rewards of this brain system are exactly what makes it susceptible to the hazards of drug abuse and addiction.

Many drugs activate the brain’s reward system, either directly or indirectly, by flooding these parts of the brain with dopamine. This neurotransmitter is responsible for rewarding normal behaviors and can produce a euphoric effect when released at higher-than-normal levels. This is one of the main reasons for the addictive effects on the brain from drugs.

Some of the symptoms of drug abuse and addiction, such as cravings and the need to keep increasing the amount of drug taken, can be traced back to their effect on the brain’s reward system. Because drugs induce dopamine levels higher and longer-lasting than the brain’s intrinsic rewards, they can become more desirable than food or sex and can lead to the development of addictive disorders.

Unfortunately, the long-term effects of this over-activity of the brain’s reward system is that the brain tends to respond by decreasing its response to dopamine. With time this can result in an abnormally low ability to enjoy any pleasure at all. Given enough time, these response changes can manifest in profound changes in the neurons and circuits of the brain. These changes have the potential to adversely affect the brain’s long-term health.

How Do You Know if Drugs or Alcohol Have Become a Problem?

When someone starts abusing drugs there are many signs they might exhibit. Many family members and friends might write these off as signs that the student is under stress. The students themselves might use school pressure as the excuse. But it’s important to pay attention if the following symptoms are happening:

Many college students have their first experiences with alcohol while experiencing the newfound freedom of college life. They attend social gatherings for which drinking is the primary focus. They are learning to deal with having more free time than they’re used to. It’s not uncommon for a college student to abuse alcohol occasionally, but here are some signs that dependence might be becoming a problem:

Where Can Students Turn for Help?

Most colleges promote their campuses as a drug-free environment. They try to keep students busy, engaged, motivated, and fulfilled. They also offer on campus resources for students who are concerned that they might have a problem with drugs or alcohol. Many schools offer a student health clinic that can provide counseling in-house or at least provide references to an off-campus treatment facility.

Universities frequently provide student help lines where students can have their questions answered or receive crisis counseling. Schools with a Psychology department will often offer low cost counseling to students. This serves the dual purposes of helping students navigate difficult issues, such as problematic drug use, while offering practicum experience for department students.

There are also off-campus resources available to students who are concerned that, although all counseling and health centers adhere to strict privacy laws, seeking help at school might be discovered by friends or classmates. Posters and pamphlets are often posted throughout campus so students can have access to resources without using student services.

College students who are recovering from addiction, or looking for ways to avoid the dangers of substance use, will find that most universities provide a variety of sober living resources. This can include organizing substance-free events, groups and gathering places. The key is for the student to surround themselves with others who are as committed to sober living as they are, however they manage to accomplish that.

If you or someone you know is struggling with substance abuse, call Northeast Addictions Treatment Center to help setup a recovery plan specialized for you.