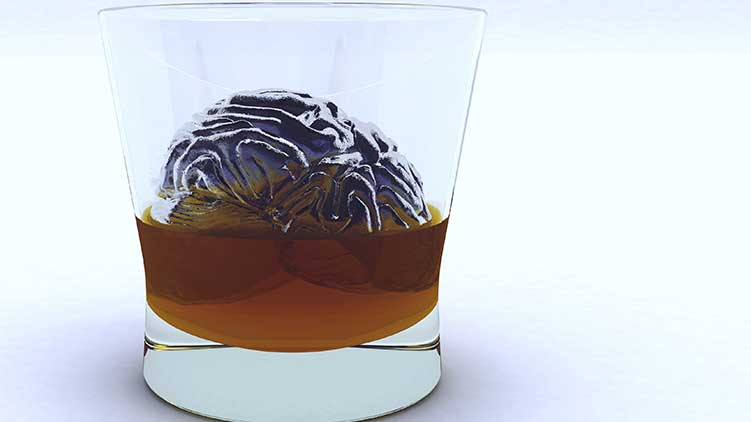 Wet brain or wet brain syndrome is a term used for a brain disorder called Wernicke-Korsakoff syndrome. It’s typically caused by excessive alcohol abuse or alcohol addiction, but there are other causes as well.

Excessive alcohol use can damage the lower regions of the brain (the thalamus and hypothalamus) which can lead to permanent brain damage and memory problems. These are the main symptoms of wet brain.

Wernicke-Korskoff syndrome comes in two forms, which is why the syndrome has two names. The first stage is Wernicke encephalopathy and the second stage is Korsakoff syndrome or psychosis.

Wet brain is primarily caused by a deficiency in Vitamin B1 or thiamine. The body needs this vitamin for the heart and central nervous system to function properly.

A thiamine deficiency can be caused by malnutrition, nutritional deficiencies, and a poor diet. It can also come up in people who have cancer, are struggling with an eating disorder, or have a chronic infection.

However, the most common reason someone is deficient in thiamine is due to excessive alcohol consumption.

Alcohol depletes the body of any thiamine it has stored up in the liver and reduces the body’s ability to absorb thiamine through the digestive system. When thiamine is in short supply over a long period of time, brain damage and wet brain may occur, which can ultimately lead to coma and death.

There are two different stages of wet brain: Wernicke encephalopathy and Korsakoff syndrome.

With Wernicke encephalopathy, lesions form on the brain from the lack of thiamine, potentially leading to neurological symptoms like memory issues. This is a temporary condition that can be treated.

When the signs of Wernicke encephalopathy begin to disappear, it doesn’t necessarily mean you’re getting better. It can also mean that Korsakoff syndrome is coming next.

With this syndrome, there is an impairment of learning abilities and loss of memory that may stop someone from functioning normally. It is often permanent and can be life-threatening.

The first stage of wet brain, Wernicke encephalopathy, comes with a number of signs and symptoms including:

Treating wet brain as soon as the symptoms show up is recommended. The longer you wait for treatment, the more serious the disorder can become.

The primary goal of treatment for wet brain is to control the symptoms and prevent the disorder from getting any worse. This disorder can only be reversed in the Wernicke encephalopathy stage.

Once you have Korsakoff psychosis, it can be very difficult to reverse the damage. But that doesn’t mean treatment can’t do anything for you.

Some forms of treatment for wet brain can include:

Treatment For Alcohol Use Disorder

For those with alcohol use disorder who seek addiction treatment, there are several steps involved.

Because it is dangerous, and often deadly, to simply quit drinking alcohol when your body has become dependent on it, an alcohol detox program is likely recommended.

In alcohol detox, healthcare providers can give you medication to ease your alcohol withdrawal symptoms. They are also there to ensure that if anything serious does come up, it can be treated immediately.

After detox, you typically have a choice between inpatient residential treatment and outpatient treatment.

With inpatient treatment, you stay at a residential facility 24/7 while receiving care. This care usually comes in the form of therapy, support groups, addiction education, and dual-diagnosis treatment for any co-occurring mental health issues.

Outpatient treatment, on the other hand, allows you to go home after treatment sessions each day. You receive the same type of treatment as you would in inpatient care but you’re able to be at home and see your family and friends.

If you or a loved one are struggling with substance abuse, please contact Northeast Addiction Treatment Center to learn about our outpatient rehab programs.

Is Alcohol A Depressant?