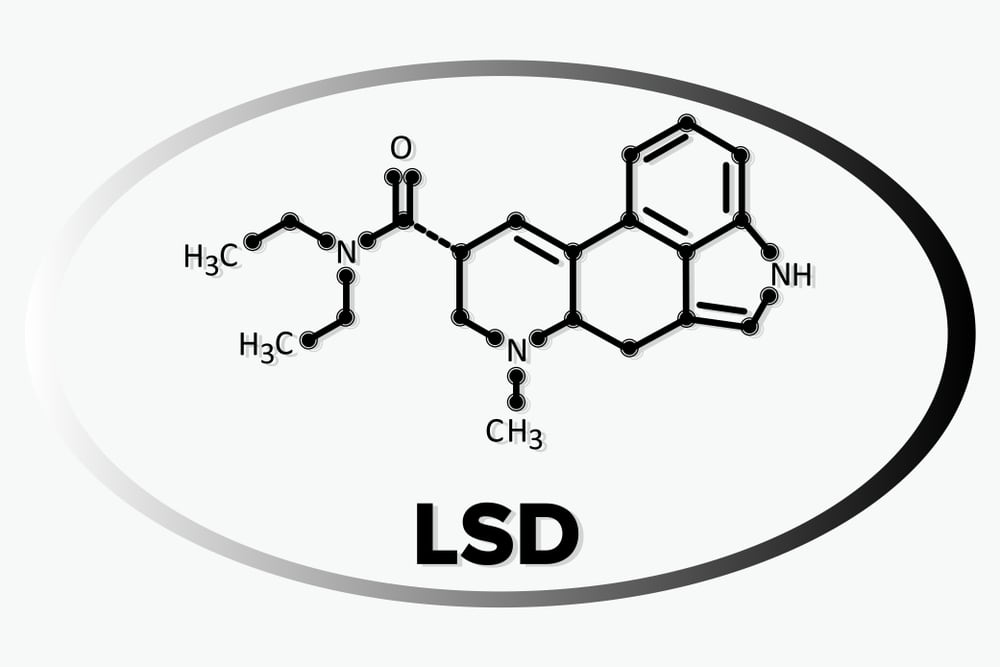 Lysergic acid diethylamide, also known as LSD or acid, is a hallucinogen. This psychedelic drug has a number of brain effects, including altered visual perceptions and states of consciousness. It can also cause extreme paranoia and confusion.

The effects it has on your brain are what most people refer to as a “trip.” This experience typically begins anywhere between 30 minutes to an hour after you consume it. LSD has a half-life about three to four hours. This means that about half of the dose has been metabolized at that time.

How LSD Affects Your Body and Brain

After you take LSD, it is absorbed in your gastrointestinal tract. It enters your bloodstream and organs after about 10 minutes. It’s mostly processed and metabolized in the liver.

How long it lasts depends on physical factors, such as your metabolism. The duration of LSD body and brain effects also vary by dosage.

Many people take single doses or what’s commonly referred to as micro-doses. It can last anywhere between six and 12 hours. Peak levels usually occur after one and a half hours.

There is limited research on the long-term effects of LSD. However, it’s possible to develop a tolerance for it. When this happens, you require larger doses, which influences how long it stays in your system. Whether it’s detectable and for how long also depends on the type of drug test or screening.

LSD drug tests are incredibly rare. There is limited commercial use for them. However, it is possible to test for it using non-traditional methods.

How Long Does LSD Stay in Your Urine?

Your liver breaks down LSD and turns the molecules into metabolites. These metabolites are what will be detected on urine drug tests if it’s still in your system. After about 24 hours, your body eliminates just one percent of these metabolites.

Standard lab tests do not screen for LSD. However, it is possible to check for it through a urine test. LSD can be detectable in your urine for as many as four to five days after you ingest it.

How Long Does LSD Stay in Your Hair?

Hair tests are known for being able to detect drugs for an extensive period of time post-ingestion. They aren’t common for most drug screenings. However, they are even rarer for LSD detection.

LSD is usually taken in very small doses. This makes detection difficult. It would require an advanced testing method such as high-performance liquid chromatography or gas chromatography.

Using one of these techniques, LSD metabolites are detectable up to 90 days after administration.

How Long Does LSD Stay in Your Blood?

Blood tests are among the most popular and accurate types of toxicology screening. LSD can stay in your blood for six to 12 hours.

How Long Does LSD Stay in Your Saliva?

Saliva tests are not common for LSD testing, nor are they easy. There are very specific parameters that must be met in order to detect LSD through saliva screening. For example, it needs to be administered within three hours after taking the drug. It would also need to happen in a lab using a specialized technique. It’s not a simple, standard ‘swab test.’

How Long Does LSD Stay in Lab Tests?

As we discussed, it is rare that a drug screening will test for LSD. However, it is possible to have specialized drug tests ordered. LSD testing can be done in a lab using private research methods.

The detection window varies by test. For blood and saliva, it can be detectable for anywhere between a couple of hours after you ingest it to 16 hours.

LSD metabolites may be present in your urine for five days. It’s detectable in hair for up to three months.

Factors that Affect How Long LSD Stays In Your System

There are a number of factors that affect how long LSD stays in your system. These also influence how long it may be detectable in drug tests. Some of these variables include the last time it was taken as well as the dosage.

Your kidney and liver function also comes into play.

If you’re concerned about testing positive for LSD on a drug test, you might have an addiction problem. Acid is not known as being a highly addictive drug. However, with frequent use, you can develop a tolerance that requires increasing your dosages.

Both the short- and long-term effects of LSD can be detrimental to your health. The trip can cause irrational and erratic behavior. You may also find yourself in risky situations due to your altered state of mind. Chronic use may even lead to psychosis.

There’s no need to let an LSD addiction impact your quality of life. There are a variety of treatment options available that will provide you with the help and support you need.