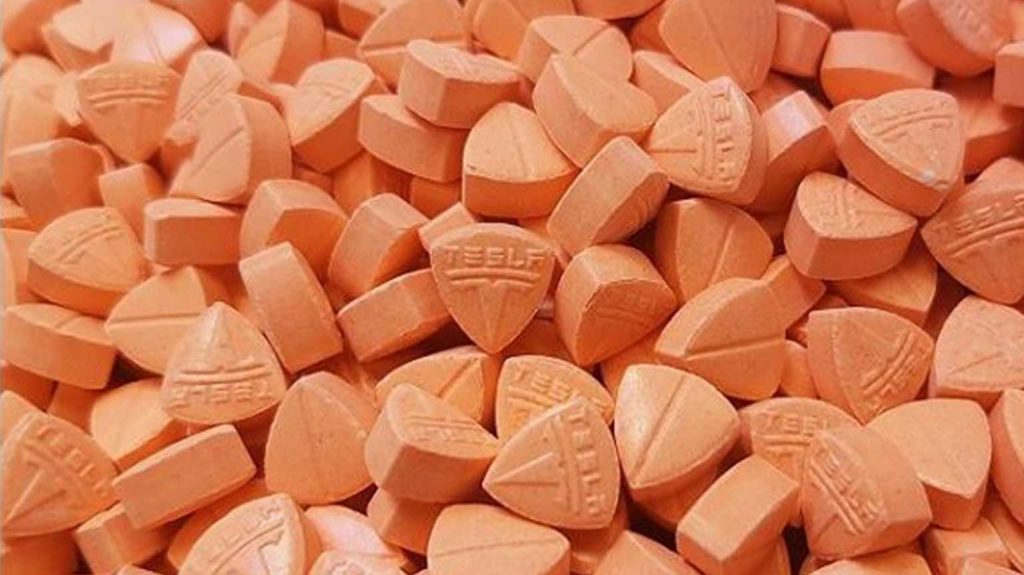 Orange Tesla ecstasy pills contain 3,4 methylenedioxy-methamphetamine (MDMA). The small orange tablets are shaped like a shield and have “Tesla” stamped above the t-shaped Tesla logo.

They glow under a blacklight, and some of them sparkle with purple glitter.

They’re popular because they’re potent, have a fun design, and represent a well-known brand with a good reputation. Most people are more likely to buy an ecstasy pill with a familiar logo than a plain white one that anyone could have made.

But orange Tesla pills have nothing to do with Tesla, an American vehicle manufacturer and clean energy company founded by Elon Musk.

The branding doesn’t mean they’re high quality or even that their quality is consistent. Anyone can copycat an orange Tesla ecstasy pill by using a similar press and dye.

MDMA is a street drug with no approved medical use in the United States. It’s a Schedule I controlled substance. Ecstasy pills are more common in Europe, while “molly,” the powdered form of MDMA, is popular in the US.

That said, you can still find ecstasy tablets at American raves and music festivals. And taking these tablets comes with risks.

They May Contain Other Drugs

Since MDMA is a street drug, there aren’t any quality standards to monitor it. Drug dealers or manufacturers might lace it with other drugs like methamphetamine (a stimulant), dextromethorphan (a cough medicine), or ketamine (an anesthetic).

MDMA could also be adulterated with weaker substances. Some ecstasy pills tested in the United Kingdom each year contain no MDMA at all, notes The Loop, a UK non-profit that does pill-testing at concert venues.

Ingesting a substance you don’t know you’re taking can lead to unexpected consequences.

You Don’t Know How Strong They Are

Orange Teslas have a reputation for being stronger than other ecstasy pills, but they don’t always contain the same amount of the drug. The dose can be up to 240mg of MDMA—twice a standard dose. This potency can easily cause an overdose, especially if you take more than one in a night.

They’ve Put People In The Hospital

In North Yorkshire, England, several students were hospitalized after taking orange Tesla pills. Fortunately, they made a full recovery.

The local county council then issued a warning to parents about the life-threatening dangers of taking even one of these pills.

Ecstasy is both a stimulant and a hallucinogen. Its effects last three to six hours. Some people take more than one dose to prolong the experience.

These attributes make it an attractive drug for music festivals and raves, where there are light shows and music, and you want to stay up all night.

You might feel more emotional closeness to others when you take MDMA, which can help with being in a crowd of strangers at these events.

But orange Tesla ecstasy pills can have adverse side effects as well.

Ecstasy raises your body temperature. Since you’re probably taking the drug in a crowded place, it’s already hot, and you could develop hyperthermia. This drastic spike in body temperature can be fatal. Or it could cause severe complications, such as failure of the liver, kidneys, or heart.

Other physical effects of orange Tesla ecstasy pills may include:

Ecstasy can cause mental side effects as well. Some psychological symptoms last days or weeks after taking MDMA. If you abuse it often, you’re more likely to experience long-lasting ill effects.

Psychological side effects of orange Tesla ecstasy pills can include:

Research continues whether ecstasy is addictive or not. But some people have withdrawal symptoms that may indicate a mental dependence, such as fatigue, depression, loss of appetite, and difficulty concentrating.

Tesla ecstasy pills come in other colors too, which more or less indicate their potency. Blue Tesla pills contain 130 mg of ecstasy, pink ones have around 224 mg, and green ones are the strongest at 300 mg. These numbers can vary depending on the manufacturer.

Tesla isn’t the only company that’s represented in the rave scene. Logos from social media companies like Facebook, What’s App, and Snapchat are also trending on ecstasy tablets.

These companies aren’t using ecstasy for advertising—it’s the drug manufacturers that choose what’s popular so they can sell more.

If you’re concerned about a loved one abusing orange Tesla ecstasy pills, or any form of MDMA, don’t hesitate to ask for help.

Our comprehensive, personalized rehab programs can set you free from substance abuse. Contact us today to learn more.

Forbes — Tastes Like Tesla: How Tesla Ecstasy Pills Became The Hot Way To Get High